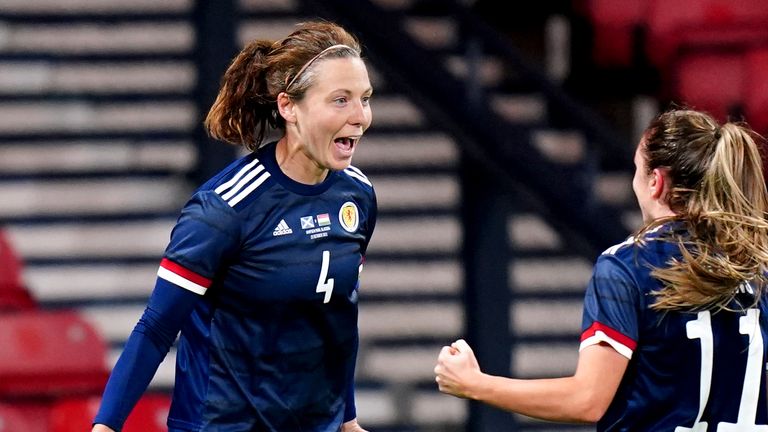 For LGBT+ History Month, the Scotland players Rachel Corsie and Claire Emslie sat down for a conversation on identity, their experiences in football, being an ally for the LGBT+ community, and why there has never been a better time to come out.

Corsie, who is lesbian and in a relationship, spoke with Emslie whose sister and close friends are part of the LGBT+ community.

The pair have played together for Scotland and had spells abroad but are now in the WSL with Corsie signing for Aston Villa earlier this year, while Emslie has been at Everton since 2020.

Corsie told Sky Sports News: “When you’re first discovering who you are, and first trying to understand those feelings, it’s also a difficult path in itself.

“I think everyone’s journey is different. I think there are a lot of positives in that in our environment – the women’s football world – there’s a lot of examples where people can hopefully relate to others who feel similarly to how they do and that enables people to feel safe and comfortable.

“I also think there are harmful instances and we’ve probably seen from a relatively young age people, whether it’s even within the environment or outside the environment, talk about your sexuality from a young age.

“You were probably asked from a young age what your preference is, and would you try it, would you go there and have you gone there, you’re close friends with somebody and that becomes a rumour.”

Emslie agrees that she was asked about her sexuality as a youngster “all the time.”

“But definitely growing up you’re wearing trackies, you’re always playing with the boys and you’re not going out and getting dressed up with your heels on.

“Although I’ve been straight my whole life, people definitely would have questioned for sure. My sister is so traditionally girlie, a dancer, I was a footballer wearing trackies – she’s grown up and she’s gay, and I’ve ended up being straight. You’d definitely presume it would be me just going on stereotypes.”

Emslie got a degree in exercise physiology in the United States. She signed for Orlando Pride and at the World Cup scored Scotland’s first goal in the tournament. She has also had a loan spell in Australia where she won the league with Melbourne City.

Corsie wore the Pride flag on her captain’s armband in a World Cup qualifier against Hungary in September last year. It was in response to discrimination towards the LGBT+ community by new laws that had been passed in Hungary.

She was Villa’s third signing of the January transfer window and returned to the UK after three-and-a-half years in the NWSL with Kansas City Current. Villa are the ninth different club in her 16-year playing career.

She is in a same-sex relationship and admits she still hears stereotypes in women’s football regularly.

“Stereotypes are dangerous in general, any time you generalise terms it can be dangerous,” said Corsie, who led Scotland into their first Women’s World Cup in 2019.

“You hear comments all the time: ‘All female footballers are gay’ or ‘Why are so many gay?’ It’s a conversation that should no longer exist because it’s false for one thing but it can be harmful.

“It’s insensitive to the fact everyone goes through a different process, whether that’s about sexuality or any types of relationships, it’s something that’s sensitive and personal to everybody and there’s probably been a lot of instances where there’s been a lack of respect around that in general.”

‘It’s positive in women’s football, people are so open’

Both players agree that there has never been a better time for people to be open about their identity, especially in women’s football.

“I think it’s a positive in women’s football that people are so open,” said Emslie, who has played for Scotland 41 times and scored nine goals.

“From my experience, my friends that I’ve grown up with, some of them when they’ve come out they’ve not come out initially and they’ve had to hide it.

“I’ve been their friend for years and never known and then eventually they’ve admitted it. Being their friend, the most hurtful thing was the fact they didn’t feel comfortable that they could come out and speak about it. When I found out, I was the one hurt that they thought it wasn’t ok.

“Now that it’s LGBT+ History Month and it’s becoming more aware and everyone accepts it a bit more, I’d like to think it’s a better age and a better generation now to accept everyone,” says Emslie.

“It definitely is, we’re starting to see that,” says Corsie who is a qualified accountant and huge Aberdeen fan.

“The more we have these conversations, ultimately the more people learn, we’re all still learning. The biggest thing people can do is try to educate themselves and the people around them and keep these conversations in the forefront and able to happen so everyone’s open to it and feel they have a space.”