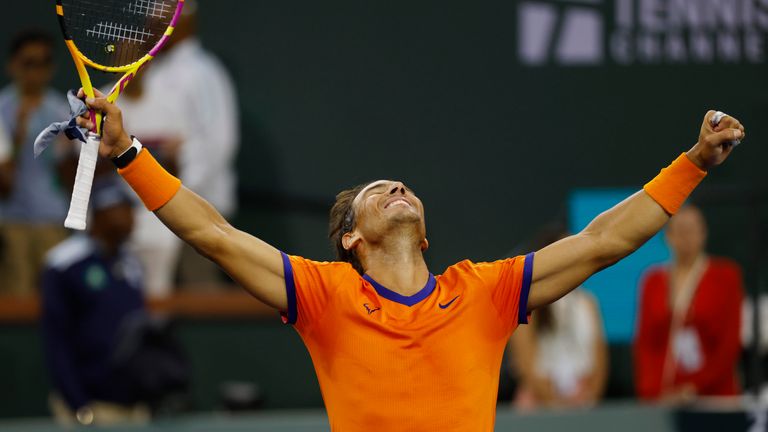 Three-time champion Rafael Nadal will play Taylor Fritz in the final at Indian Wells after defeating his compatriot Carlos Alcaraz 6-4 4-6 6-3 in an epic semi-final.

Nadal extended his remarkable winning run to 20 matches after prevailing in an all-Spanish clash of generations, defying a spirited comeback from the 18-year-old to advance in testing conditions.

The 21-time Grand Slam champion displayed his trademark tenacity against his prodigiously-talented countryman, and he can now equal Novak Djokovic’s record of 37 ATP Masters 1000 titles with victory over Fritz in Sunday’s showpiece.

“I was playing well at the beginning but it was just so difficult to stop him with his amazing shots,” Nadal admitted.

“After that I can’t say I was in control because it is impossible to be under control against a player like him.

“In the second [set] the conditions became crazy. It’s not fun playing in wind like this, it is sometimes a challenge and I can enjoy that. In terms of tennis it is OK but in terms of stopping all the time it is not good.”

Alcaraz made a blistering start to proceedings to secure an instant break, before Nadal reeled off the next four games to regain the initiative.

The world No 4 relinquished his serve for a second time as Alcaraz reduced the arrears, only for Nadal to clinch the opener after breaking in the 10th game – his 17th break point of the set.

An extraordinary second set saw the Spaniards battling the elements as well as each other, with papers, water bottles and towels blowing across the court.

Alcaraz refused to be blown away though, and following an incredible sequence of five consecutive breaks, the enigmatic 18-year-old levelled up the contest, having earlier broken Nadal in a marathon ninth game lasting 20 minutes.

The conditions eased during the third and decisive set, allowing the pair to trade winners from every quarter of the court.

Alcaraz was unable to complete a famous victory over his idol however, and after breaking with a controlled forehand volley to lead 5-3, Nadal served it out to seal a spot in his fifth Indian Wells final.

The indomitable 35-year-old will now play Fritz in Sunday’s finale, after the 24-year-old swept aside seventh seed Andrey Rublev 7-5 6-4 to become the first American man to reach the Indian Wells final in a decade.

Rublev arrived at Indian Wells riding the crest of a wave from back-to-back titles in Marseille and Dubai, but the Russian saw his 13-match winning run come to a screeching halt in the California desert.

Meanwhile, having reached the semi-finals in 2021, Fritz will now bid to become the first American man to lift the coveted title since Andre Agassi in 2001. 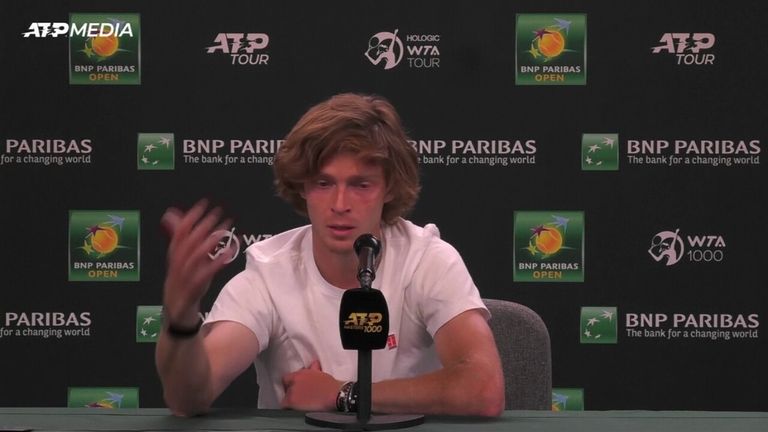 Russian tennis player Andrey Rublev says there should be no politics in sport, after he wrote ‘no war please’ on a camera in Dubai in February

Russian tennis player Andrey Rublev says there should be no politics in sport, after he wrote ‘no war please’ on a camera in Dubai in February

“All the hard work and stuff I have put in throughout the years I can finally see it paying off. It feels like the reason I play tennis.”