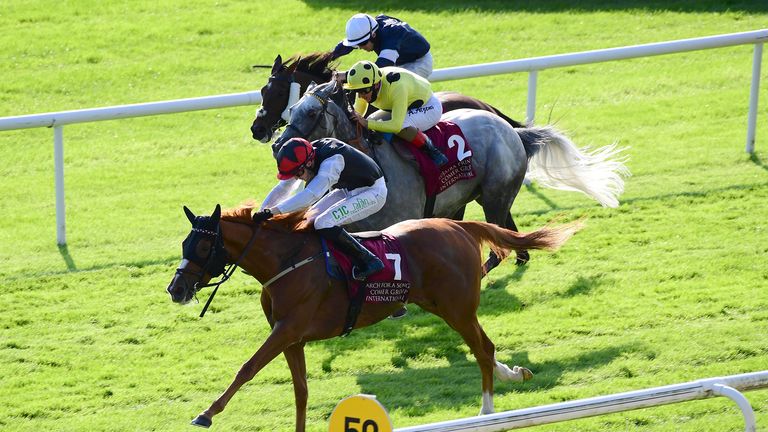 A pair of Group Two races in the French capital complement an excellent day of British action on Thursday, live on Sky Sports Racing.

The Group Two Prix Vicomtesse Vigier (7:45) sees Search For A Song return from a disappointing run behind Stradivarius in the Yorkshire Cup for the Irish 1000 Guineas-winning Dermot Weld team.

2021 winner Skazino also lines up, having struggled in Group Three company on seasonal reappearance but will be expected to improve for that run.

The other Group Two on the card, the Prix Hocquart (5:56), features Selwan and L’Astronome who top a field of five for a classy three-year-old heat.

Johnny Murtagh sends a pair of runners over to ParisLongchamp for the Listed Prix de Montretout (7:15), with Raadobarg and Baradar for the Amo Racing team.

John Butler’s four-year-old Rhythm N Rock also goes to post, having won two of his three starts to date including a good novice event at Kempton in March.

Heavyweight trainers Charlie Appleby and John & Thady Gosden tend to send a good horse to this particular novice event, and this afternoon’s renewal is no different.

The Godolphin handler unleashes both Naval Power and One Nation in the British Stallion Studs EBF Novice Stakes (1:30), having won the race in 2019 and 2021 with Boccaccio and Listed winner New Science.

The Gosden team sent out one-time Derby contender Reach For The Moon in this race last year, and this time around run Sea The Stars colt Alzahir on debut, with Frankie Dettori in the saddle.

Elsewhere at Yarmouth, The Queen has two runners in the Quinnbet.com Maiden Stakes (2:00), with Naval College (Sir Michael Stoute) and General Idea (William Haggas) bidding for a first success in a competitive three-year-old race.

Royal Ascot clues on the cards?

At Ripon, Forest Falcon, Bollin Jean and Heights Of Abraham compete in a very competitive renewal of the Ripon Cathedral Handicap (2:50), but that is arguably not the most intriguing race on the card.

The British Stallion Studs EBF Fillies’ Novice Stakes (1:20) will see Alice Haynes’ Lady Bullet look to secure a run at Royal Ascot with a second victory in as many starts under Kieran O’Neill.

The Twilight Lady drops back in grade and could be the biggest danger for the Roger Fell team, having finished down the field in Listed grade at York last time out.

And a highly impressive winner on debut at Leicester, Shining Blue, will bid to keep his unbeaten record intact for Saeed Bin Suroor and Stefano Cherci in the Evening Racing Again Wednesday 1st June Novice Stakes (3:50).

Wood Ditton third Kiteflyer gets a stone off the Godolphin horse, having won at Chepstow in good style last time out for The Queen.

Watch every race from Yarmouth, Ripon and ParisLongchamp live only on Sky Sports Racing (Sky 415 | Virgin 535) on Thursday, May 26.